The Best Band Of The 00's is a piece reflecting my opinion. Please enjoy! 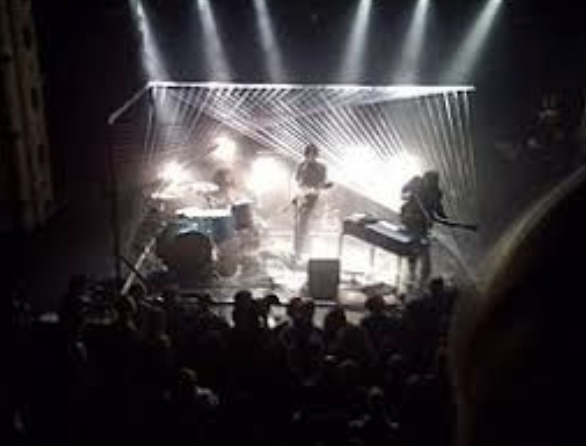 While the 00’s were full of amazing acts like LCD Soundsystem, the Strokes and Bright Eyes, one band will always take the cake for me. There was a panache behind their style that made you want to stomp your foot and space out at the same time.

That is until their Guitarist hit his Cowboy hat phase prior to their second major label release (the hat wasn’t too stylin’ but the Guitarist always was). The band never took off with the aspirations the members clearly had for it but ask any audiophile and I bet they know the name Secret Machines.

They were a 3-piece band, consisting of 2 brothers and their cousin. Their noise-rock approach was oh so unique and unparalleled until their dissolution. Despite their uniqueness and modernity, the band’s timbre still hearkened back to Avant Garde Krautrock, David Bowie and even had a touch of that good ol’ fashioned stomping drive that was John Bonham’s signature bash.

I’ll Take Familiar with a Side of Weird, Please

They were in all actuality family but even if you didn’t know that they SOUNDED like a family. Everyone was so in tune to their surroundings that watching them live was never anything short of stunning.

Aside from sounding like family, they were similar to a punch to the gut.

Brandon Curtis stabbed his keys when stationed there, hovered over his microphone so awkwardly it became interesting and beat the life out of his bass guitar to show his mastery over the lower end of the audible spectrum.

Joining this thumping, churning, hobbling train came the real punch. Delivered with full force from Josh Garza. Despite all his technical skills as a drummer, it was all about what came from that man’s 28 INCH (!) bass drum. For those non-drummers reading this, that means it was really fucking big. And loud.

Benjamin Curtis came off sort of dainty in comparison to the behemoths which made up half of the band’s power. Whereas Josh Garza and Brandon Curtis were where the power came forth from these guys, the heart came from Benjamin Curits. He supplied the thumpers with the rich layers of overtones necessary, while never truly deviating from ‘the weird’ at any given time.

A literal power-trio were becoming stars in front of our very eyes. We were witnessing the next generation. The way people speak of the Beatles, Doors or Hendrix. These guys were going to take their German Krautrock, Alt, Noise-Rock – Thing … And literally jamming it down our throats.

The Secret Machines had that rare ability to read each others’ musical minds. They could do no wrong together. This made for hard stomping jams, trippy melodies and growling, creepy lyricism. They brought raw energy and mixed it perfectly with psychedelic space rock.

Their 2004 Major Label release Now Here is Nowhere resonates with me to this day. From the first track something triggers in your brain to tell you this, this, is something special. To be daring enough to time your intro track to 9 minutes on the dot is a bold move for anyone, but especially for a debut album.

To encompass your jacket sleeve with a solid white theme throughout was intriguing to a then Junior in High School. I bought the vinyl and never looked back.

I believe I was only fortunate enough to see them live 3 times. Once at the Warsaw, where I literally walked into the Drummer, Josh Garza. The behemoth that he was, he didn’t move a muscle as I tried to stagger back to my feet and apologize.

The rest of the band was off to the side, eating pierogies, Brandon and Benjamin doing their best to not laugh at me as I stood star struck. It was a very special moment I can recall 15 years later because I got to see The Secret Machines as humans, instead of just being the towering icons they were in my head.

The Secret Machines’ second album, Ten Silver Drops, is not as stunning as their first release but is no joke either. With such solid tracks as Daddy’s in the Doldrums and I Hate Pretending, this album was no slouch in the wow department.

I felt as if Benjamin Curtis’ genius really came out on this album in a way not seen elsewhere. Despite the brilliance of his contributions on Now Here is Nowhere and later with the band School of Seven Bells, the intensity with which Curtis wails on this album puts him in contention as one of my favorite Guitarists of all time.

Then, just as quickly as they had captivated my attention, the best band of the 00’s was yanked away from me. POOF .. disbanded. The band was already falling to pieces when they thought they could bring on longtime session Guitarist, Phil Karnats, to replace Ben (who had left in order to pursue his musical endeavors with School of Seven Bells).

I caught one of their ‘comeback’ shows with Phil and recall him being a block of wood. Nothing terribly interesting about him. Certainly no Ben Curtis. He didn’t have the flair, the panache, the raw ability to conjure whatever sounds he desired.

The band sort of crumbled once Ben left, clearly to the chagrin of Garza and brother/keyboardist/bassist Brandon Curtis. I always kept the faith that someday they’d reunite. I mean they were literally family, right?

I held my breath until December, 29th, 2013. On that sombre day the genius that was Benjamin Curtis left this mortal realm all too soon, at the mere age of 35. He died of a weird form of Cancer. One I won’t even try to spell here.

It was aggressive and caught up to him only ten months after his diagnosis. I felt very much personally effected by his passing. Almost like I knew the guy. I still get somewhat choked up even writing now about it.

He seemed like such a kind and caring soul that it was too much to imagine I’d never hear a new lick, riff, or hiss from this man’s amplifier.

That is until mid-last week when out of literally nowhere came a collection of alternate takes and unreleased B-Sides by the Secret Machines called Allaire Sessions.

FINALLY! I could hear Ben’s Guitar again. I could regain that sense of youth that they always seemed to fill me with.

Despite the album being a wonderful listen, it is an emotional 6 tracks to get through. I still miss you, Ben. We never met but I certainly hope you rest in peace.

And that, Ladies and Gentleman is a lazy, short history of the band that ruled my 00’s. Who is your favorite band of the aughts? Please feel free to discuss within the comments section of this same page and, as always, keep on rockin’ and rollin’!

Watch them here in their heyday –

I watch this concert to this day. It’s that God damn good!

If you enjoyed this little diatribe into psychedelic rock, you should check out some of the articles on here about my unabashed love for punk rock. We’ve got material on The Clash, Green Day and The Flaming Lips to name a few. Poke around – I’m sure there’s something for everyone who appreciates the alternative side of rock.